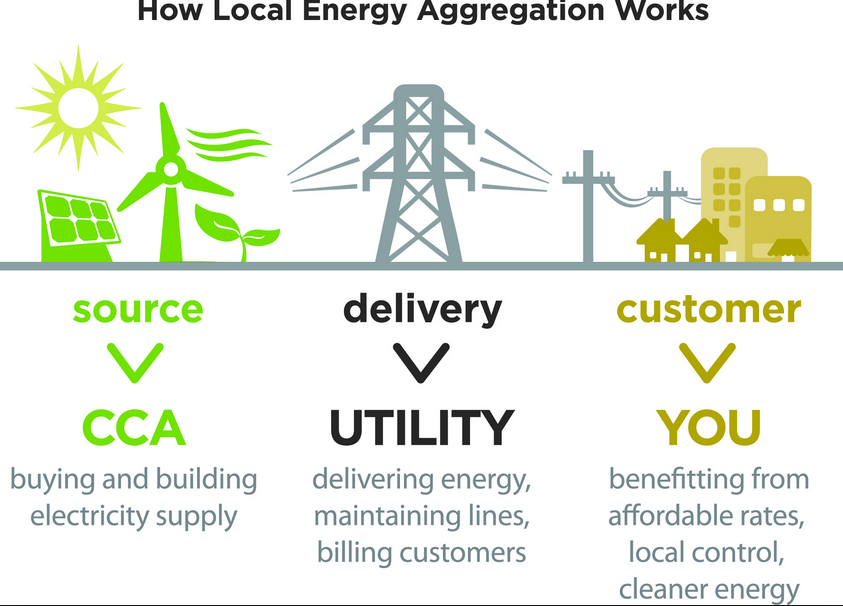 What is CCE, Why is it important, Who is leading?

Currently, most communities in northern California buy their electricity from PG&E. Community Choice Energy is an alternative, enabled by a 2002 state law (Assembly Bill 117), that allows cities or counties to choose their electric provider and the source of their electricity.

Communities can purchase and generate electricity according to their own community priorities – greener than PG&E offers, at a competitive cost.  PG&E still maintains the power lines (and manages delivery and billing), but the power purchase contracts are set by the city’s CCE program.

Proven successful programs in Marin, Sonoma, and Lancaster (see below) are delivering electrical power with a much higher portion of renewables than PG&E currently provides, at lower costs than PG&E.

Clean Energy: San Jose could, with this one action, enable the community to make a major transition to clean energy faster than any other way.  Reducing greenhouse gas emissions is a major goal for the State, and a focus area of San Jose’s Green Vision.

Choice: Lets each customer personally choose the energy plan that best fits them. Whether to potentially pay less than they pay now for a cleaner energy mix, pay a bit more for 100% renewable energy, or pay the same price they pay now for the same mix (stay with PG&E). So there are no risks to individual rate payers.

Community Control and Economic Benefit: Stimulates renewable energy development projects, helps create local jobs and attract businesses, and puts competition in the energy utility market.  CCE offers the chance to capture some of the approximately $400 million per year that San Jose pays PG&E for electricity generation, and have the decision-making control to save customers money, and invest revenues locally to produce jobs and benefit the local economy.

An Example: Since the launch of Sonoma Clean Power (SCP) in 2014, they have increased the percentage of overall spending in Sonoma County from an estimated 3% of dollars by PG&E prior to SCP launch, to over 25% today by SCP, and this percentage is expected to increase over time. SCP has already achieved $50 million in direct customer savings plus over $35 million in shifted spending back into the county.

Marin Clean Energy and Other Leaders

Three community choice districts are already successfully operating in California, and CCE’s operate in at least 5 other states as well.  Originally termed Community Choice Aggregation (CCA), the terms CCE and CCA are interchangeable.

Links to Marin’s, Sonoma’s, and Lancaster’s CCAs, and other resources, are here at our Resources page.

A Program of Center for Climate Protection

Please Note - This site is not the official City of San Jose site. It is a CCE advocacy website. Please visit the City's San Jose CLEAN Energy website to find Council meeting details, plus you can sign up to receive news and announcements directly, and email the city with questions or suggestions. San Jose Clean Energy (SJCE)

CLEAN ENERGY COMMUNITY ADVISORY COMMISSION Appointments have been made - First meeting is expected to be held in mid-February, 2018 See details on the Status and News page.

Just in time for the vote, a SJ Mercury Editorial and an Op-Ed from Mayor Liccardo strongly support Community Choice Energy for San Jose! (May 2017) See the articles in Status & News

SJ's Technical Study/Business Plan has been released! Check it out here. The Summary Memo is here.